WIZKID AND EFYA IN HOT PICTURE!

Wizkid has lately made it to become the king of trend with everything he does hitting the news tabs so badly. His recent photo with Ghanaian songstress Efya who is also signed to his Starboy label is testament to this.

Wizkid’s fans apparently reacted oddly to what they saw him posted on Instagram, the picture as seen was from the location of their music video shoot. Following the blasting that came with anger, Wizkid hid comments and disabled commenting on the pic.

A bit of these screenshots were managed to be grabbed:- 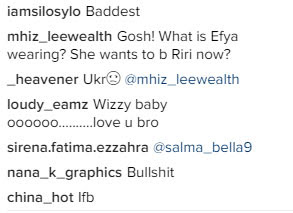 There were more pictures from the Star boy video shoot.

There were more pictures to talk about from the video shoot just that the particular one with Efya seems to be rated X!