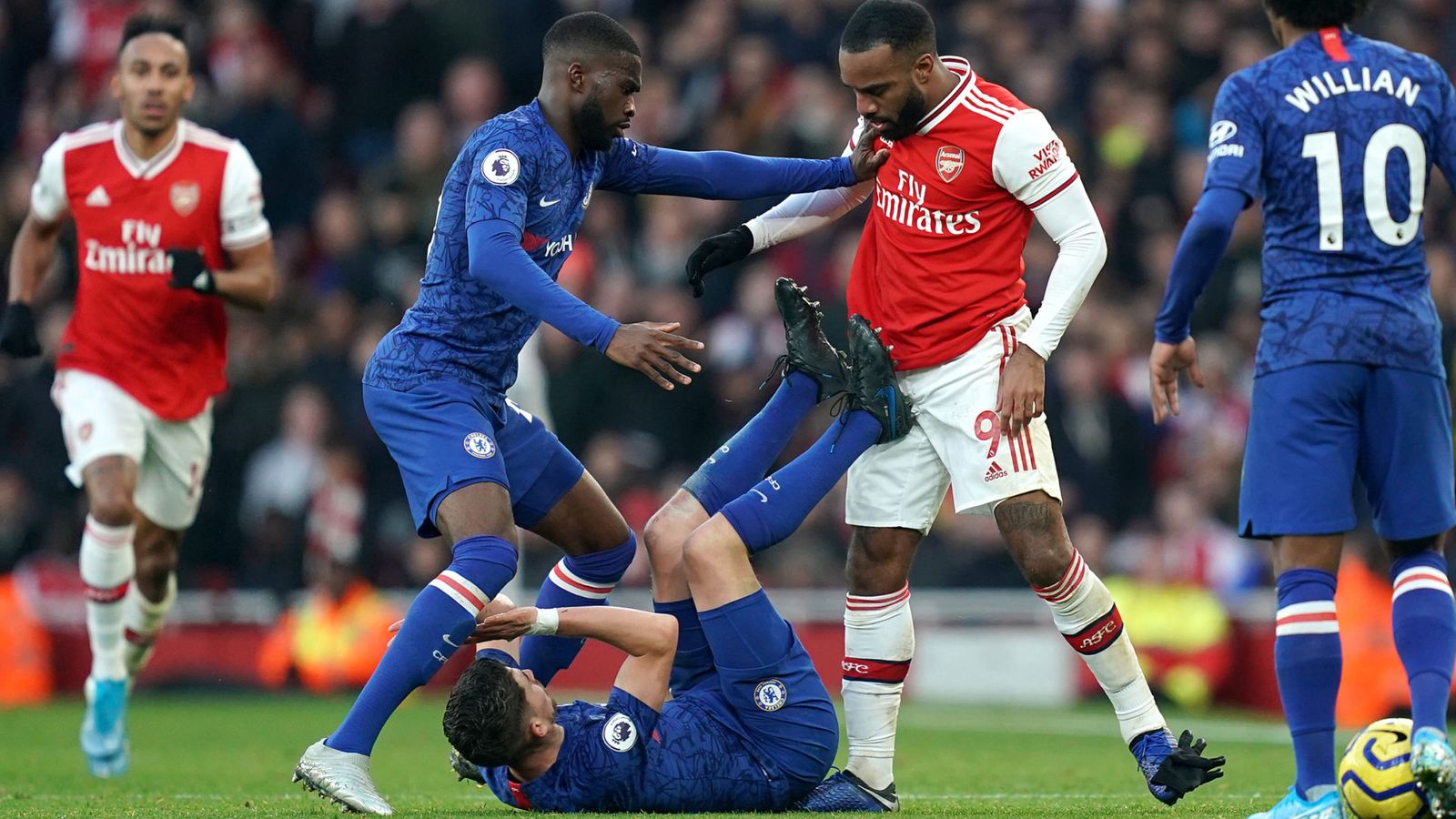 Both Chelsea and Arsenal will be looking to return to winning ways when they take on each other in the London Derby on Tuesday night.

Local rivals Chelsea and Arsenal will lock horns with each other at Stamford Bridge on Tuesday night on Matchday 24 of the 2019-20 Premier League, with an eye on bouncing back from their weekend results.

Chelsea comes into the game on the back of a shock 1-0 defeat to Newcastle United away from home, which prevented them from closing down the gap to third-placed Leicester City, who also lost their fixture against Burnley. A win on Tuesday would take Frank Lampard’s side to within three points of the Foxes and eight above Manchester United in the fifth spot.

Arsenal, on the other hand, has seen their performances improve under new manager Mikel Arteta, but that hasn’t been backed up by results. The Gunners were held to back-to-back 1-1 draws by Crystal Palace and Sheffield United. They will be aiming to get back to winning ways and move up from their current tenth position in the Premier League table.

The last time these two sides clashed in December last year at the Emirates, Chelsea came back from a goal down to beat Arsenal 2-1. And ahead of the latest London derby at Stamford Bridge, we at The Hard Tackle take a closer look at the encounter.

Reece James, who was Chelsea’s most impressive player against Newcastle, limped off with an injury towards the end of the game. However, the youngster is expected to be fit and available when Arsenal come visiting. Marcos Alonso is also back from his injury, but Christian Pulisic and Ruben Loftus-Cheek remain sidelined along with Marco van Ginkel.

Lampard set his team up with a three-man backline against Arsenal last time out but is expected to stick with the 4-3-3 that he has used in the last two games. Kepa Arrizabalaga has had to cop a bit of flak of late but should continue between the sticks for Chelsea.

James, should he be fit, ought to continue at right-back while captain Cesar Azpilicueta should start at left-back again. Andreas Christensen has been impressive in the last two games and should start against Arsenal, with Antonio Rudiger partnering him once again ahead of Kurt Zouma.

Jorginho should continue as the deepest of the three Chelsea midfielders and look to control the tempo of the game while keeping an eye out on Mesut Ozil. N’Golo Kante returned from injury in the last game and ought to feature from kick-off again, but Mason Mount is likely to make way for Mateo Kovacic after his ineffective display at Newcastle.

With Pulisic still out with injury, Callum Hudson-Odoi should once again get the nod on one of the flanks along with Chelsea’s No. 10 Willian, while Tammy Abraham spearheads the attack for Lampard’s side.

Arsenal will once again be without captain and star striker Pierre-Emerick Aubameyang, who is suspended. Sead Kolasinac, Kieran Tierney and Reiss Nelson are all out with injuries, while Calum Chambers is a long-term absentee. Sokratis missed the last game due to illness, but should be ready for return against Chelsea at Stamford Bridge.

Bernd Leno is a guaranteed starter between the sticks for Arsenal, while Ainsley Maitland-Niles and Bukayo Saka are likely to continue as the two full-backs. David Luiz should start at the heart of the backline, but Sokratis is in line to return to the side at the expense of Shkodran Mustafi.

The midfield double pivot of Granit Xhaka and Lucas Torreira should remain intact, with Matteo Guendouzi not in the best form of late. Arteta will have a decision to make in the No. 10 role with Dani Ceballos waiting in the wings, as Mesut Ozil has failed to impress in the last two fixtures. However, the German is likely to get the nod once again on Tuesday night.

With no Aubameyang or Nelson, the wide-attacking duo of Nicolas Pepe and Gabriel Martinelli, both of whom were impressive against Sheffield United, should start again. Alexandre Lacazette ought to continue as the lone striker and look to end his goal drought against Chelsea.

In all competitions, Chelsea has lost six home games this season – they last lost more at Stamford Bridge in a single campaign back in 1994-95 (7).

Arsenal has won just one of their last 10 away Premier League games (D6 L3), though they are unbeaten in their last five on the road (W1 D4).

Chelsea has already lost as many Premier League games this season as they did during the entirety of last season under Maurizio Sarri (eight defeats).

The 18-year-old has made quite the impression in his debut campaign at Arsenal, having arrived in the summer from Brazilian outfit Ituano. Martinelli, so far this term, has featured 20 matches across all competitions finding the back of the net on nine occasions, while setting up three more.

The teenage attacker had a good game against Sheffield United last time out and will be looking to carry that form forward when Arsenal visit Chelsea. With Alexandre Lacazette struggling for form, another good showing from Martinelli could see him nail down a starting spot for himself once Aubameyang returns.

Chelsea was unbeaten in their last four matches prior to their defeat to Newcastle United and will be confident heading into the derby, having beaten Arsenal already this term. The Gunners have looked much better in recent games since Arteta has taken over and will be confident of getting a positive result despite having failed to win the last two matches.

It is no secret that Chelsea has been largely inconsistent at Stamford Bridge all season, while Arsenal has been very poor on the road, winning just two league matches away from the Emirates in the ongoing campaign, somewhat balancing things out between the two teams. And that is why we at The Hard Tackle are predicting this one to end in a 1-1 draw on Tuesday night.